It seems only fitting that in the wake of the Hockey Horror Show, my budget should be similarly blown. Although sometimes it’s wonderful to be an expat, it’s hard not to feel some ties to home. After all, Australians love their Kiwi cousins – surely the feeling is mutual?

In March, I went to Melbourne and bought spandex to make Rose Hip tights and a maternity top (a gift). Since the tights have now gone to a new home I’m going to decide they don’t count either. I also bought some cotton for burp cloths (also a gift).

Then, Fabric-a-brac happened, which cost me $32, plus an extra $20 for a Hummingbird pattern that Kat had ordered for me. 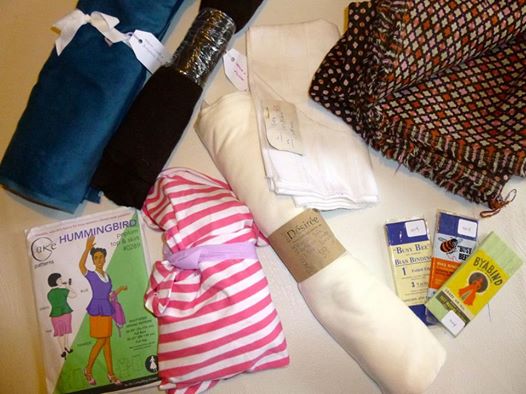 Next, the WSBN went to Levana, a knits paradise, and I spent a (comparatively restrained) $37 on what will soon be two dresses and a t-shirt.

The very next weekend, a local church had a fabric sale, which cost me $19 (mainly in notions).

And the icing on the cake… this week The Fabric Warehouse undercut The Fabric Store by having a 40% off sale. You could tell they meant war, because they included drinks and snacks. I found myself $130 poorer, mind you, $40 of that is a delicious wool/silk trouser blend, to make two pairs of work trousers for the Fashion Critic. Does anyone know a good men’s trouser pattern, that’s formal enough for the office? Other goodies were a navy wool blend knit for a work dress, some viscose/elastane for a slip (and an amazing 80s Knitwit pattern for the same purpose), some green sweatshirting for a Lola dress and some more spandex for Rose Hip tights V2.0.

You know, I don’t care. I haven’t used much stash, but I haven’t added to it either. I’ve had a productive year, made lots of good presents, and challenged myself with new techniques and patterns. I’m going to keep on keeping track, because I think it’s good to know how much sewing is costing me, but I know that every dollar is worth it. If nothing else, it means that I’m a tiny part of a huge and diverse community.

In the interests of getting through some stash, I’m aiming to spend only $365 on clothing and sewing this year. This doesn’t count purchases for gifts, so this might be a particularly generous year! Here’s the January damage:

The Fabric Warehouse sale was on this week. I should say, is on, because I fully intend to go again. I spent a measly $21 on 7 metres of great stuff, fabric I wouldn’t normally buy but look forward to playing with. It got me thinking about how much I spend on clothing. With travelling, I haven’t been doing a lot of sewing in the last 12 months. I haven’t done much active stash-accumulating, either, though my fairy godmother in Hong Kong has other plans and keeps sending me lovely boxes. And I haven’t bought many clothes, either. In fact, what have I bought in 2013?….

Well, yeah, shoes. They don’t count, though, do they? Shoes are expensive, and ya gotta keep your feet warm.

Likewise, tops wear out pretty quickly, and when you’re not a knits sewist, they add up…

OK, this was a bit of a splurge. Two dresses while my sewing machine was on the high seas. 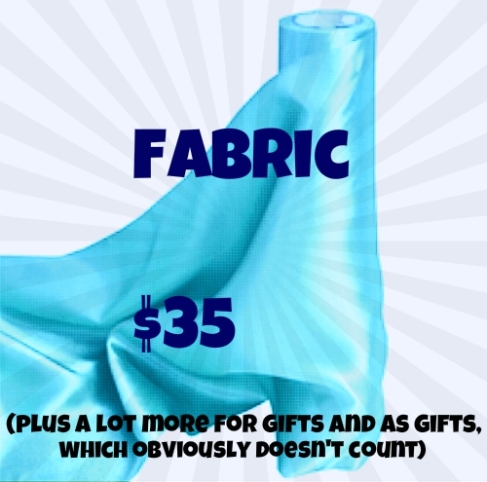 SO restrained. Actually there was another $20 purchase too, come to think of it.

So what’s that altogether? $655. In 9 months, in which I thought I’d barely bought clothes.

Which brings me to my personal 2014 challenge. I’m going to give myself a budget of a dollar a day. $365 for the year. Sounds like heaps. Stash-busting doesn’t count, but everything else does.

Stay tuned, I have something exciting to show you next time. I’ve been busy with Christmas sewing! This level of organisation is unprecedented, I’m always the one being politely asked to leave the shops on Christmas Eve. 84 days to go!